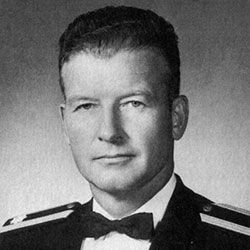 Jones, born in Norfolk, joined the Air Force after graduating from West Point in 1945. COL Jones, an A-1E Skyraider pilot, risked his life in an attempted rescue mission near Dong Hoi, North Vietnam.

On 1 September 1968, LT COL Jones led a flight of four A-1H Skyraider aircraft on an escort mission. The flight was accompanying two helicopters sent out to rescue the pilot of a downed F-4 Phantom. Arriving over the area, he made several low passes across a valley to find the pilot and pinpoint enemy gun positions. Enemy gunners opened fire on the propeller-driven Skyraider.

COL Jones attacked with cannon and rocket fire while relaying the pilot's location by radio. While making his second pass, his aircraft was hit and the cockpit was set ablaze. At the same time, his transmissions to the rescue forces were being blocked by repeated calls from other aircraft that he bails out. Before the fire died out, COL Jones was badly burned and his radio transmitters were disabled. Despite his severe burns, he landed his damaged aircraft safely and insisted on passing on the vital information before receiving medical treatment.

COL Jones survived his wounds and was promoted to full Colonel but died the next year in an aircraft accident in the United States.