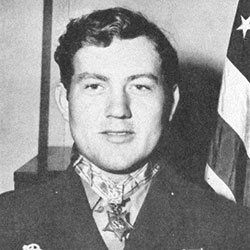 Born in North Carolina and although only 14 years of age, having a muscular build, Lucas enlisted in the Marine Corps Reserve in Norfolk without his mother's consent. On August 6, 1942, he gave his age as 17 and went to recruit training.

On Iwo Jima, on 20 February 1945, PFC Lucas and three other men were suddenly ambushed by a hostile patrol which savagely attacked with rifle fire and grenades. Quick to act when the lives of the small group were endangered by two grenades, PFC Lucas unhesitatingly hurled himself over his comrades upon one grenade and pulled the other one under him, absorbing the whole blasting force of the explosions in his own body.

By his inspiring action and valiant spirit of self-sacrifice, he not only protected his comrades from certain injury or possible death but also enabled them to rout the Japanese patrol and continue the advance. Miraculously, PFC Lucas survived the blast and was presented the Medal of Honor from President Truman at the White House on Friday, 5 October 1945.

PFC Lucas is the youngest Marine ever to receive the Medal of Honor and the youngest of any branch of the military since the Civil War.