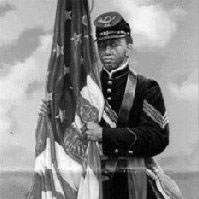 Private Barnes worked as a farmer before enlisting in the Army in Norfolk. He then joined Company "C" of the 3gth United States Colored Infantry. At the battle of Chaffin's Farm on September 29, 1864, Barnes' regiment was among a division of black troops assigned to attack the center of the Confederate defenses at New Market Heights. The attack was met with intense Confederate fire. Over fifty % of the black troops were killed, captured or wounded.

PVT Barnes was awarded the Medal of Honor for being "among the first to enter the enemy's works; although wounded." PVT Barnes remained in the Army as a Sergeant after the war, traveling to Texas with his regiment.

He died of tuberculosis at an Army hospital in Indianola, Texas on 24 December 1866.