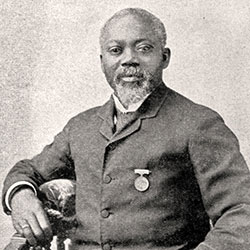 Sergeant Carney was born in Norfolk and simply named "William". He was a slave but escaped to Massachusetts, like his father, through the Underground Railroad. Once William escaped from slavery and joined the Massachusetts Regiment, he met a white man named William Carney. The "white" William Carney gave the "black" William Carney his last name so he could serve in the 54th Massachusetts Volunteer Colored Infantry.

As a Sergeant, he took part in the July 18, 1863 assault on Fort Wagner, SC. He received his medal for saving the American flag and planting it on the parapet and although wounded, holding it while the troops charged. Recognizing the Federal troops had to retreat under fire, Carney struggled back across the battlefield, and although wounded twice more, returned the flag to the Union lines. SGT Carney modestly said, "Boys, I only did my duty. The old flag never touched the ground."

SGT Carney was the first black soldier to earn the Medal of Honor. He died in Bedford, Massachusetts on 9 December 1908.