Stand Up & Speak Out 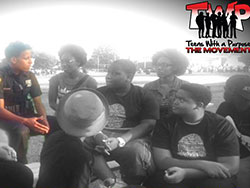 "Stand Up and Speak Out," a public service announcement campaign, was developed in the wake of a violent summer weekend in 2014, where youth were suspects and victims. Norfolk Police created the campaign to reach out and directly address youth and youth violence.

Teens with a Purpose

"Stand Up and Speak Out, was executed in tandem with the local youth group, Teens with a Purpose, allowing an important message to be delivered directly to youth by their peers. The public service campaign was officially launched on the first day of school for Norfolk Public Schools.