Data: How are we doing?

To get the data on this dashboard, the VDOT Crash Analysis Tool was used to filter down to show crashes only for the City of Norfolk and crashes only on Norfolk streets (VDOT-owned roads were removed). The dashboard shows crash data in Norfolk from January 1, 2015 through May 31, 2022.

The images below are heat maps for all crashes (fatal and non-fatal) in 2021 shown separately for bike crashes (left), pedestrian crashes (middle), and vehicle only crashes (right). Through these maps, we can identify hot spots for each type of crash. This is important to show because where there are persistent issues for vehicles might be different than where there are persistent issues for bikes and pedestrians. 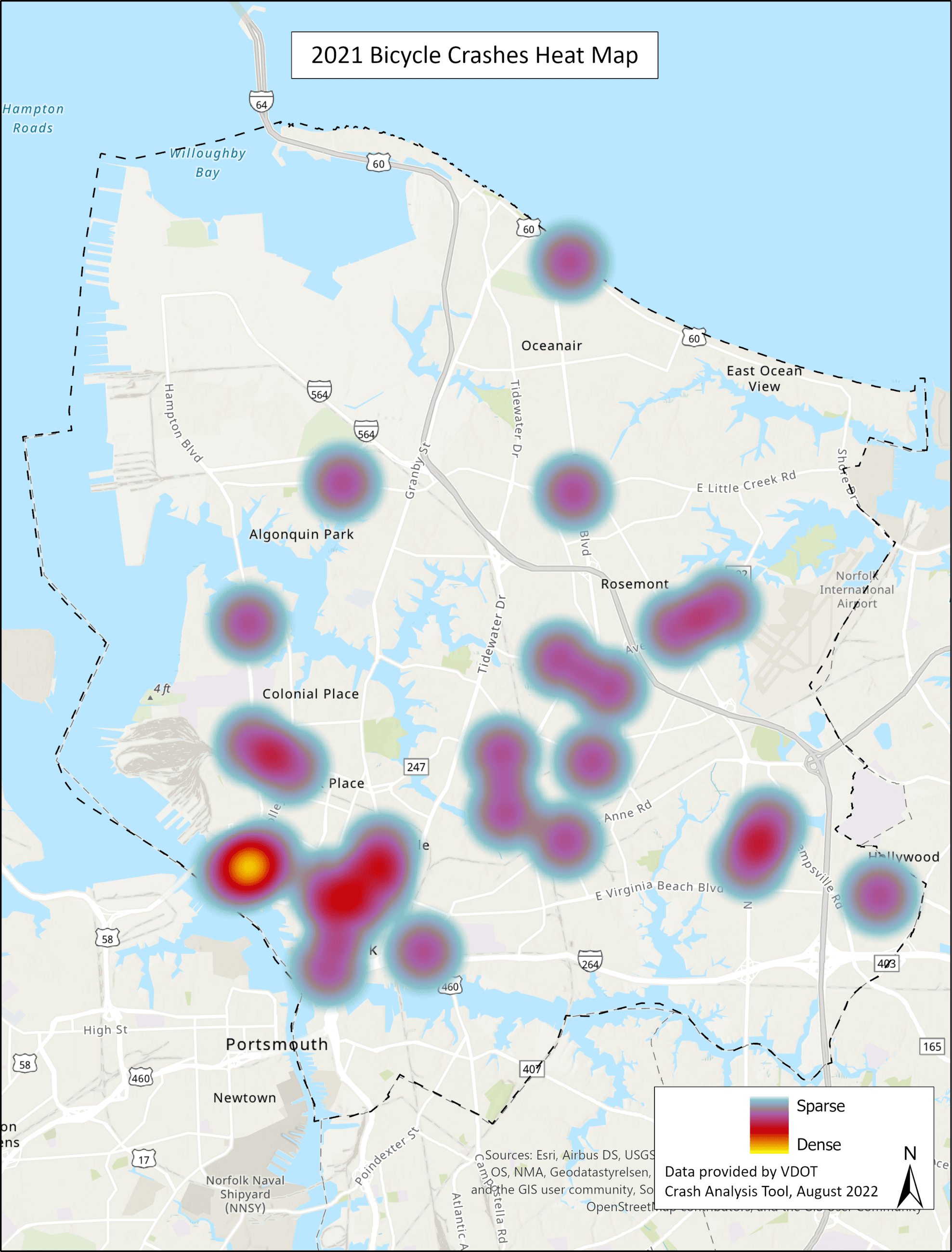 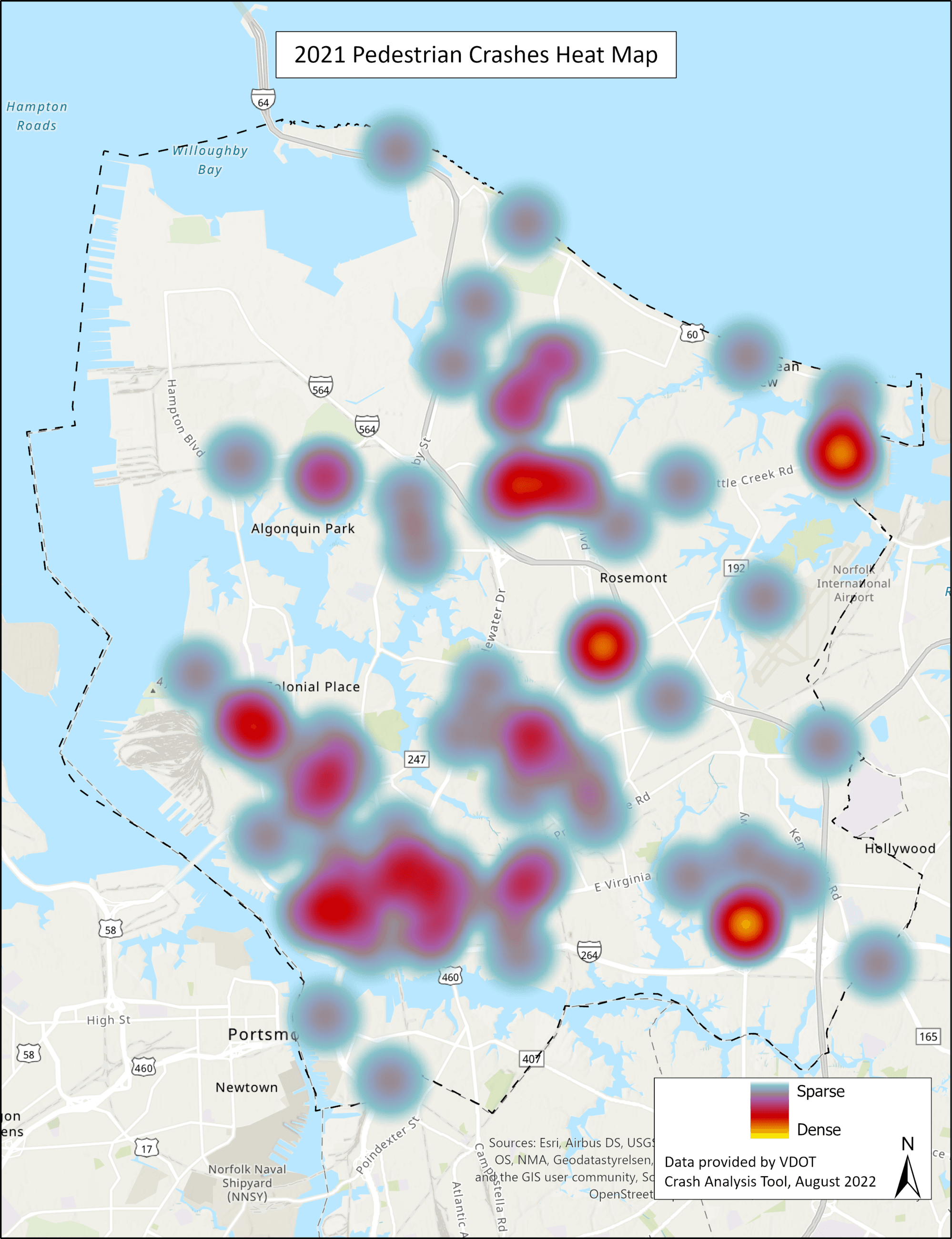 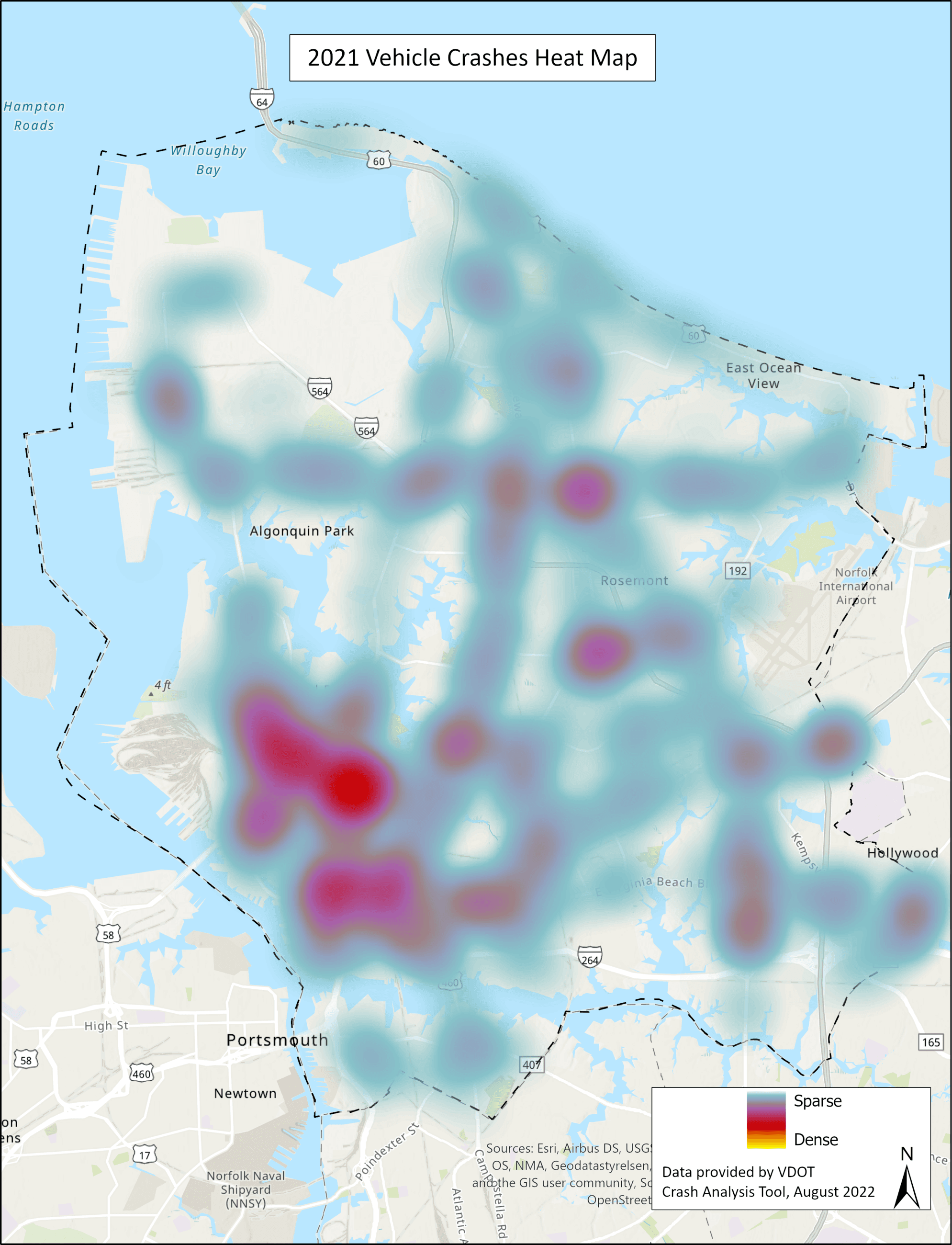 The map on the right shows bicycle crashes for 2016-2020 along existing bike facilities (bike lanes, sharrows/shared lane markings, and the Elizabeth River Trail). The total number of bicycle crashes reported within this 5-year period is 182. Of these, 27 crashes were on the bike network - 14 occurred on streets with sharrows/shared lane markings, 3 occurred in buffered bike lanes, and 10 were in unbuffered bike lanes. 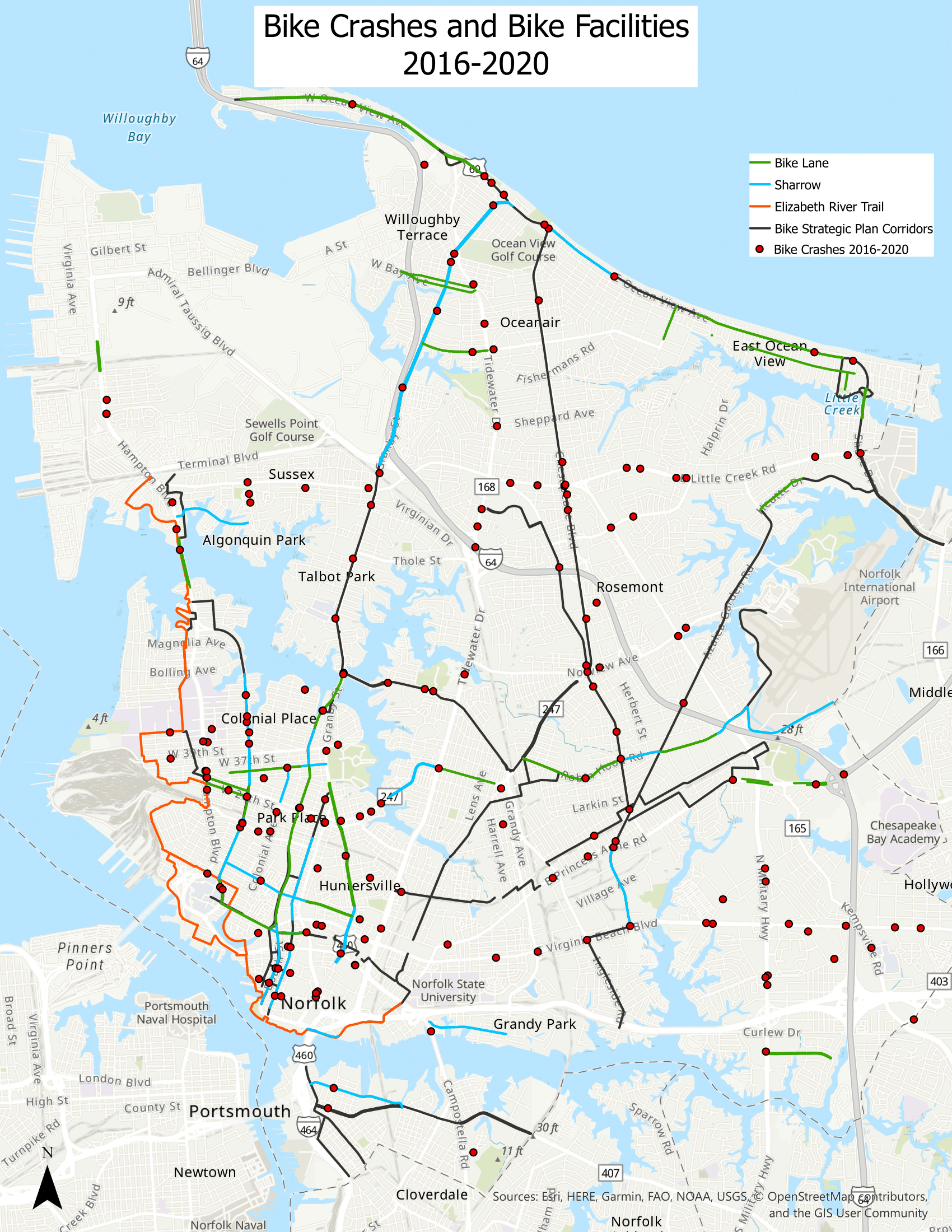 Looking at the Norfolk Bicycle & Pedestrian Strategic Plan corridors, there were 63 bicycle crashes that occurred with the following breakdown:

The total number of fatal crashes recorded in Norfolk in 2021 was 28 (up from 24 in 2019) with alcohol and speed being the top driver contributing factors for all fatal crashes. 46.4% of all fatalities were alcohol related and 42.8% were speeding related. Vehicle speed increases both the likelihood of a crash, as well as the severity of the crash, as it diminishes a driver’s ability to recognize and avoid potential conflicts. (Source: 2021 Virginia Traffic Crash Facts) 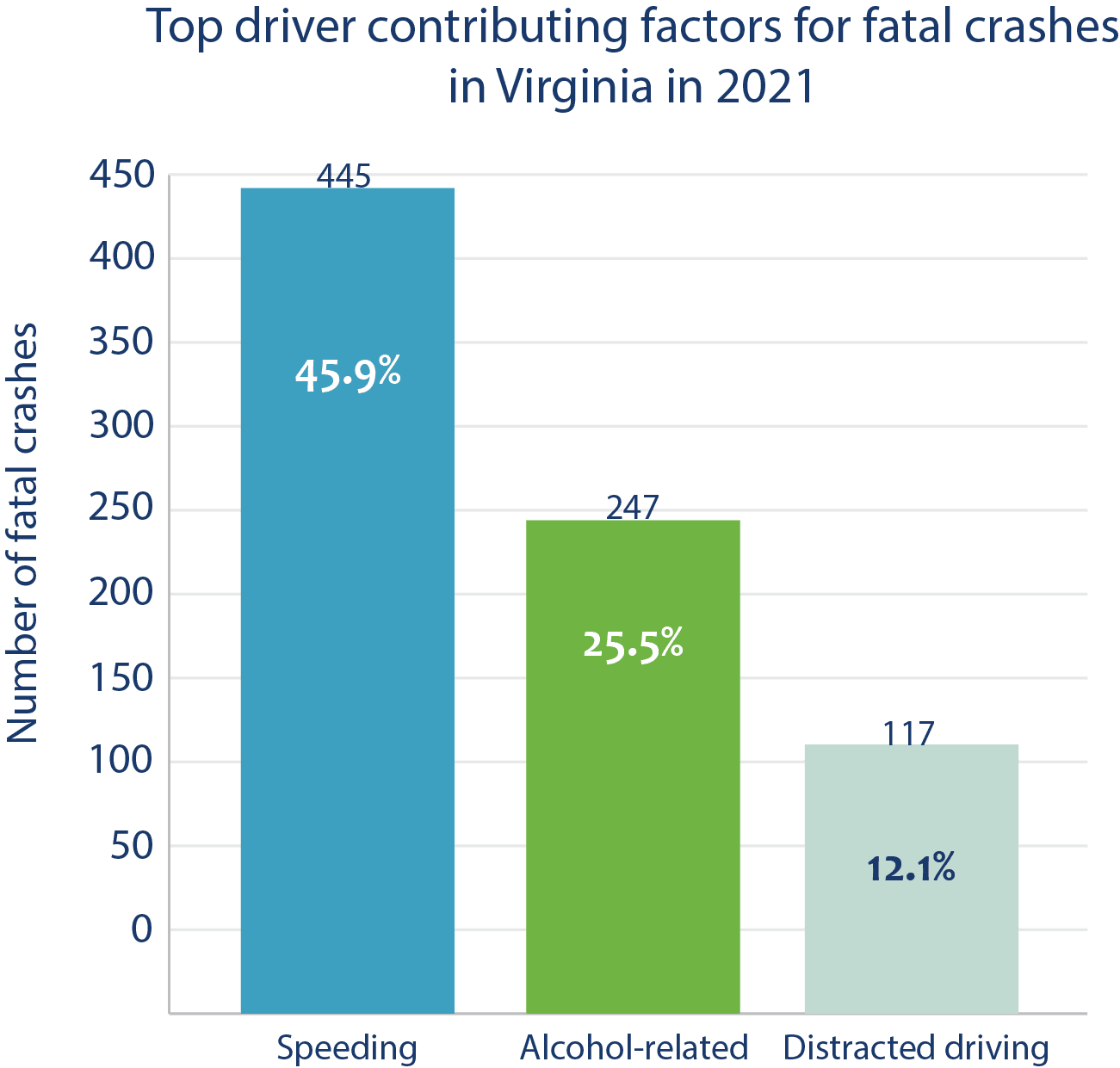 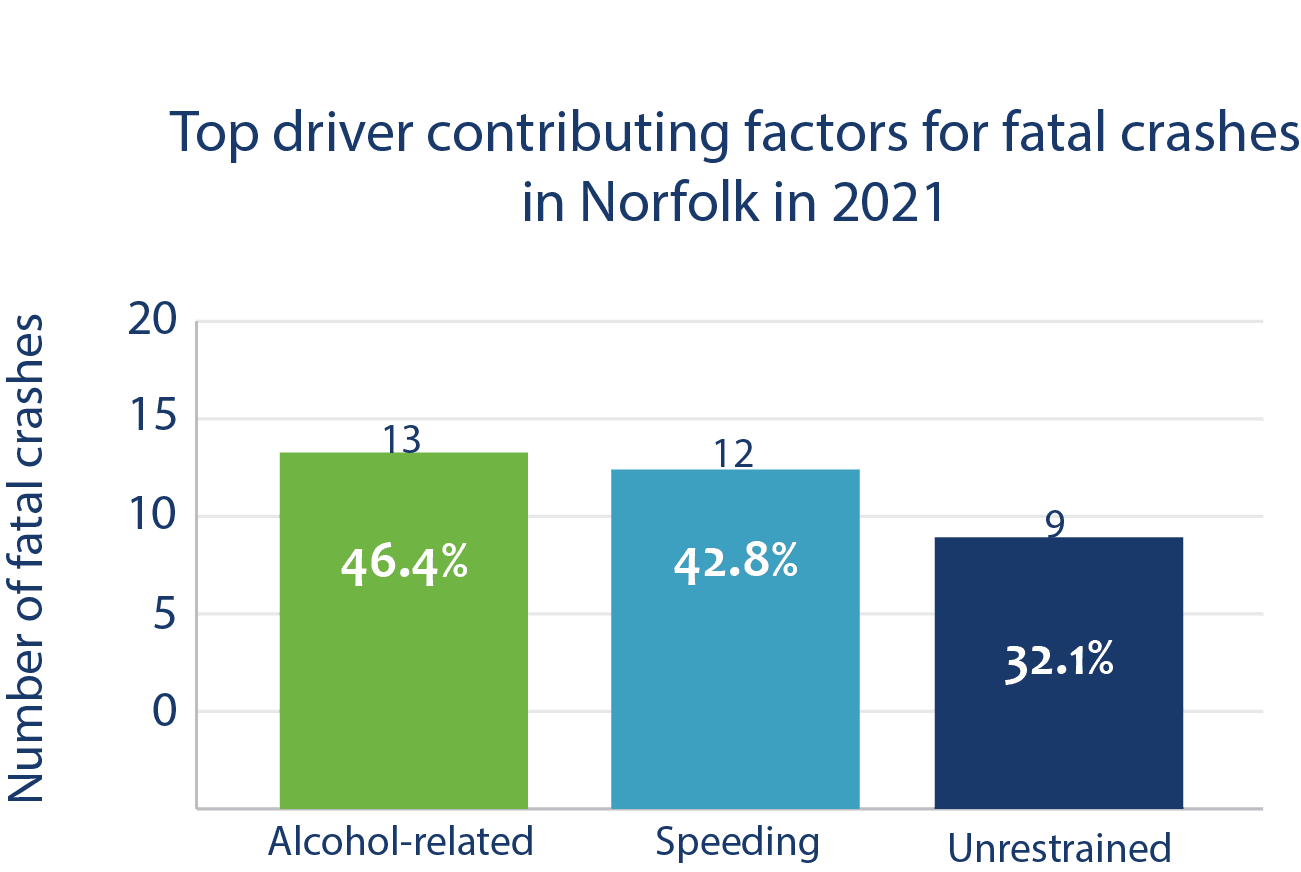 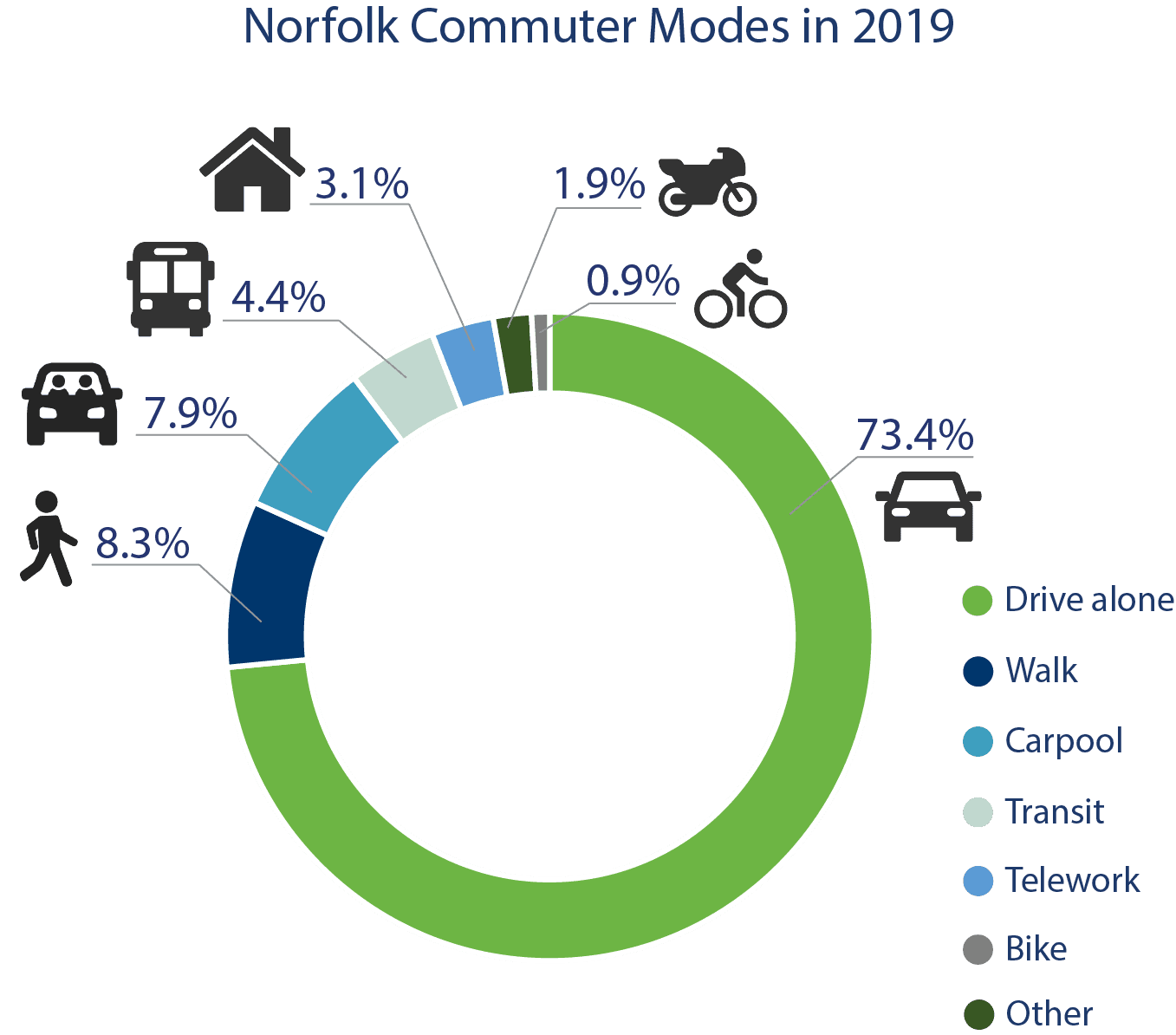 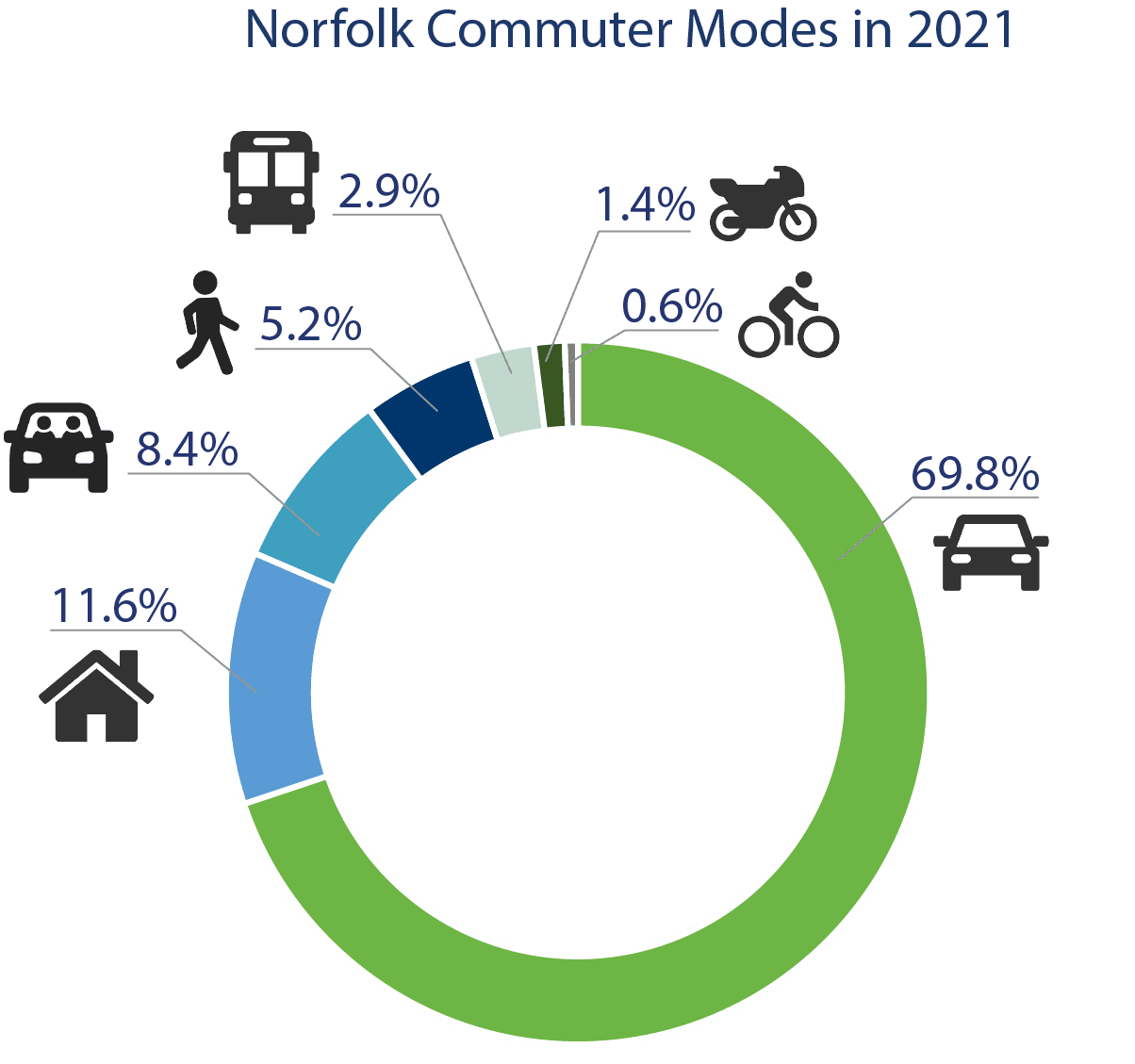 Norfolk Deaths by Transportation Mode in 2019 and 2021 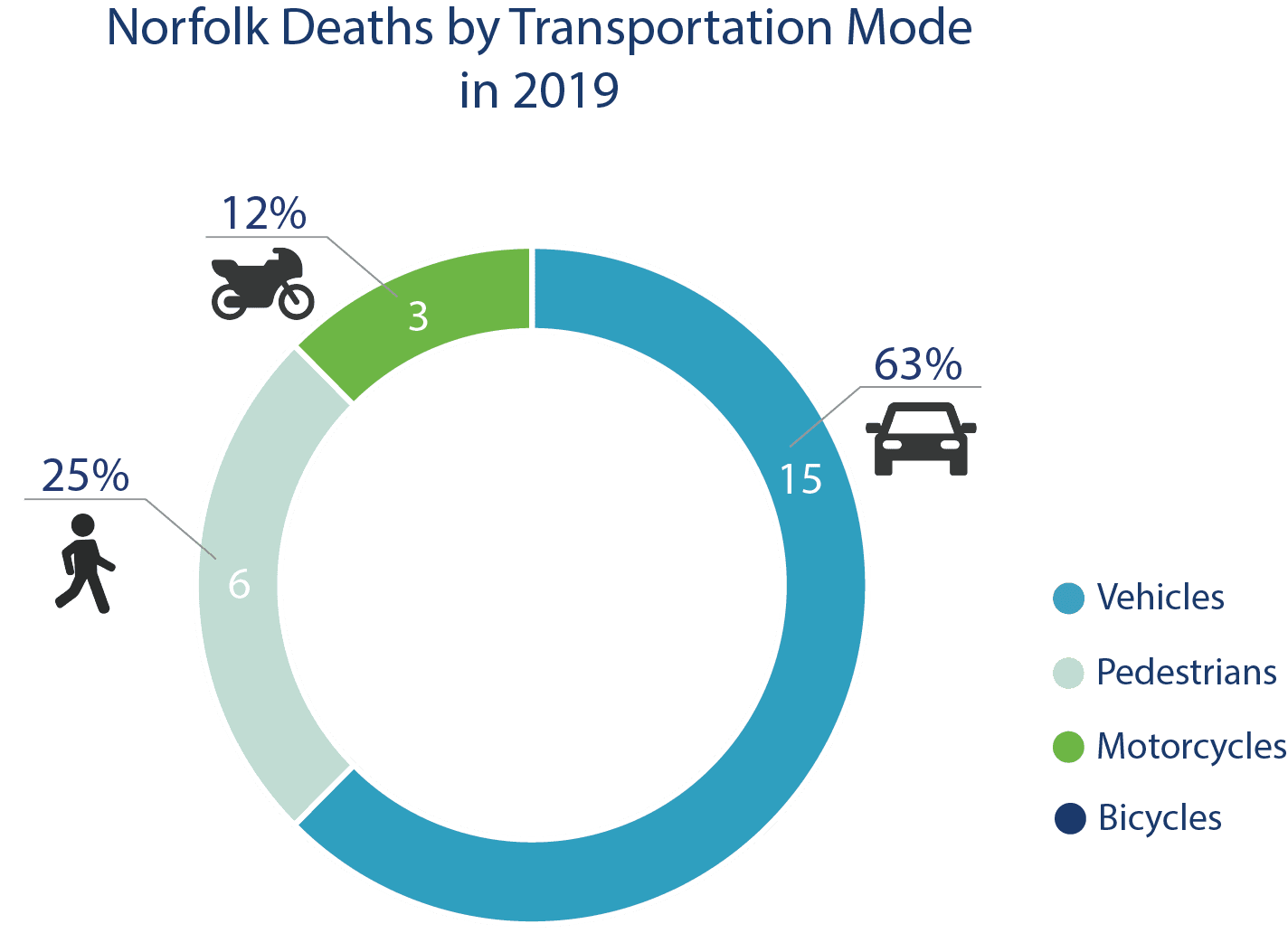 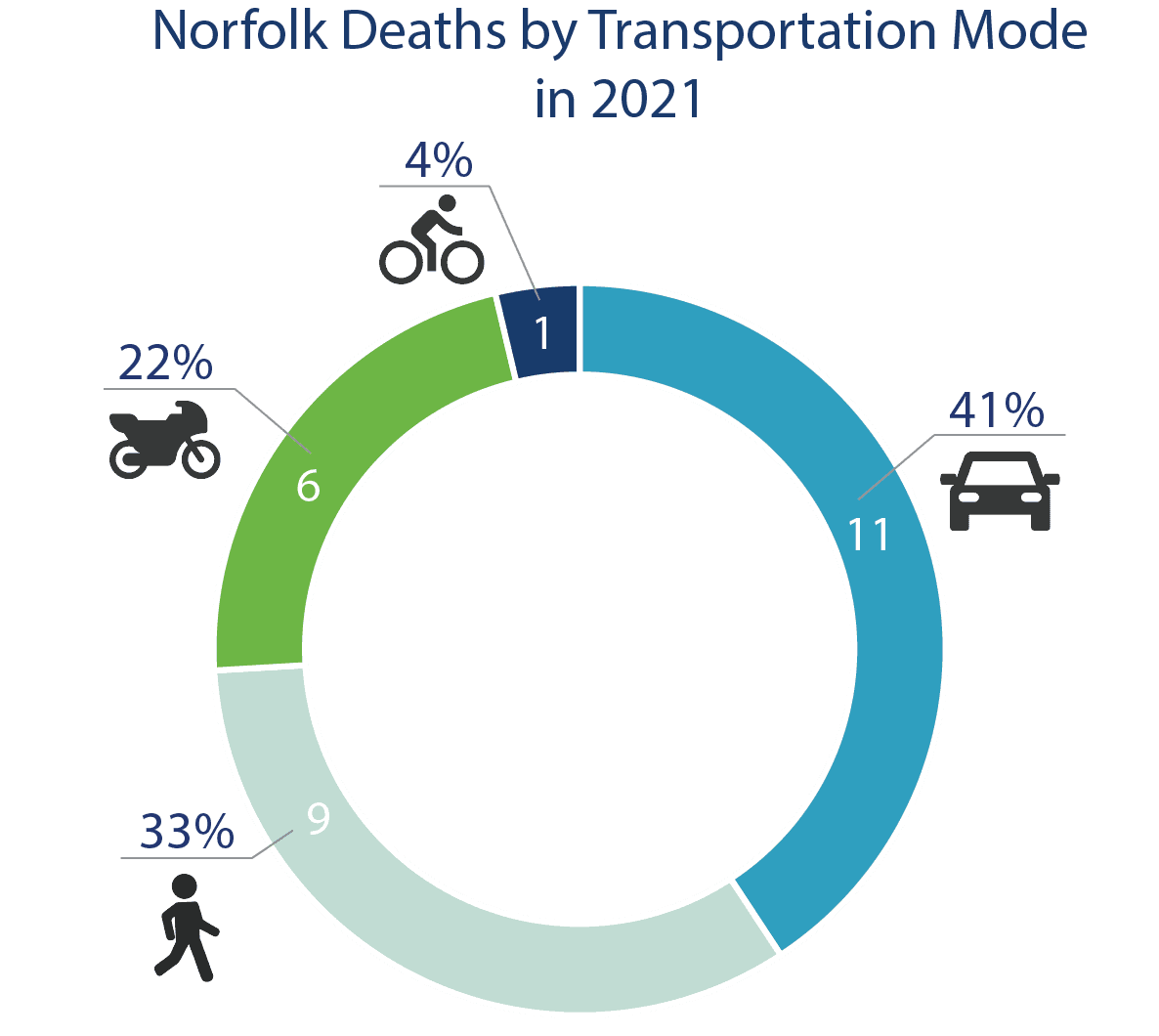 Fatal crashes per 100,000 population in Norfolk between 2016 and 2020, 7.3 and 10.5 respectively, have been relatively low compared to other similarly sized cities. Norfolk’s numbers also fall below the national number of fatal crashes per 100,000. However, since 2019, the gap between Norfolk's numbers and the national numbers has been shrinking. The graph below compares fatal crashes in Norfolk to four cities with similar populations as well as with the U.S. (Population data source: U.S. Census Bureau Annual Estimates of Resident Population; Crash data source: National Highway Traffic Safety Administration/FARS) 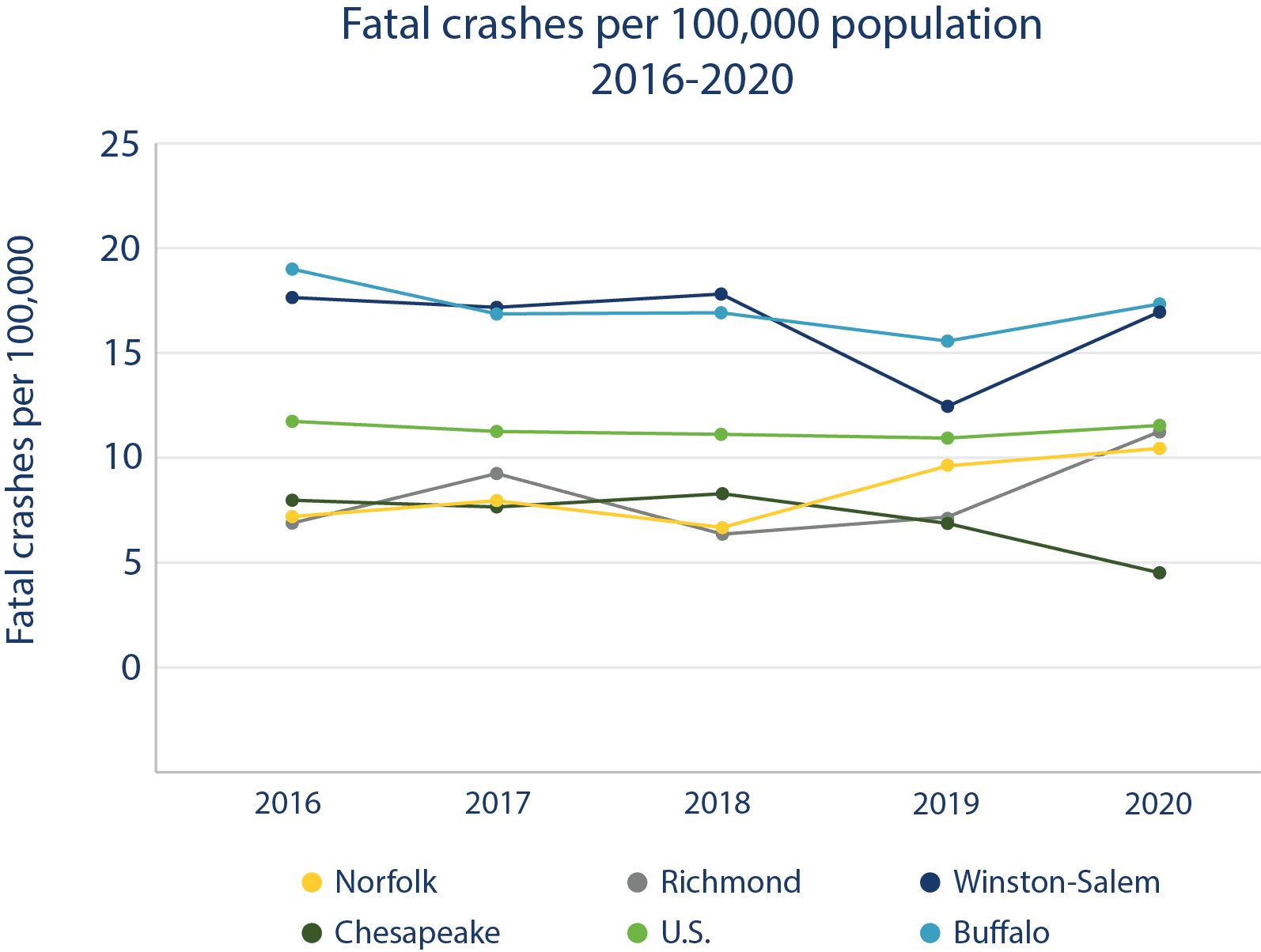 The City of Norfolk initiated a Bike-Pedestrian Counter Program in March 2021 to provide a reliable method of data collection. This data will be used to advance the goal of making biking and walking more comfortable and more connected in Norfolk by better understanding the trends of pedestrians and cyclists in the city. The City aims to use the bike-pedestrian counters to support the expansion of bike lanes.