In December of 2015, City Council adopted the City of Norfolk Bicycle and Pedestrian Strategic Bike Plan. The plan was a result of a significant amount of public outreach including three public meetings, meetings with several focus groups, hundreds of responses to an online survey and two public hearings. The plan details 12 corridors that were selected through the public outreach effort that citizens identified as those streets within the City where they would most like to see bike facilities. 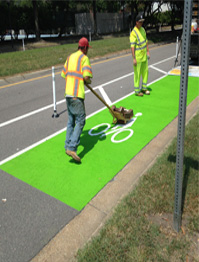 Rest easy, the lane reductions and road diets (taking a road from two lanes to one) take into consideration the number of cars that travel along the street throughout the day. Even so, we’re going to keep an eye on traffic and adjust the traffic lights if it becomes necessary.

Early Results: The new bike lanes on Llewellyn already show improvement in two areas. More cyclists are using Llewellyn to get where they need to go AND drivers are slowing down and traveling at the speed limit.

The City will post traffic information, project updates, mailers, special advisories on Facebook, Twitter, and other social media. Construction notices will be sent to each resident, business, and civic associations. This webpage will be updated regularly.